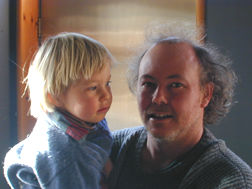 
Klaus Ottmann: How did you get into furniture?

James Hyde: I'm interested in how furniture constructs the figure. This comes from painterly concerns. I've often been more interested in the pictorial qualities of the painting support than its surface. My furniture can be thought of pictorial abstractions of a painting panel.

Ottmann: What seems to be the most obvious link between your earlier work and your furniture pieces is the material, your fondness for using industrial materials, such as Styrofoam, duct-tape, galvanized steel, which in themselves have an utilitarian connotation.

Hyde: I haven't made furniture with Styrofoam or tape—at least not yet! For my furniture I mostly use galvanized sheet metal. I used to use sheet metal a lot for my painting panels, but now I use it exclusively for the furniture. It's a cheap material, but is very beautiful. I like the way the galvanization is stippled and how it reflects. It has a clearly recognizable planar quality, like a sheet of paper and it manages to be both flexible and rigid. But there is something I like about using industrial materials. Industrialization has been such an enormous force this century; estheticizing and domesticating it are a way to engage it—to turn it around on itself. 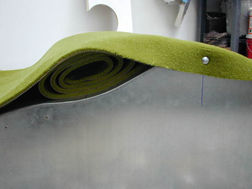 Ottmann: For years you've been redefining the language of painting. Is the furniture an extension of that or is it a separate issue?

Hyde: Certainly we use paintings and furniture differently, so in that sense they are really separate bodies of work. But the furniture comes out of how I've been thinking about painting over the years with different issues. For me painting is neither an object or a practice, but is a habit of seeing. I've done a number of works that dematerialize and even deobjectify, various qualities of painting, to the point that it can be called something else. As an artist, it's been important, not only to intensify my ways of looking as a painter, but also to see how it can develop in different situations, as with the furniture 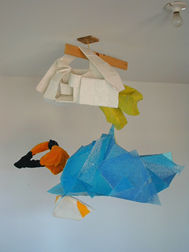 Ottmann: And then there are things in between—like your mobiles, which are art but also utilitarian objects.

Hyde: There is a line of thinking in Modernism that equates art with uselessness, which may explain why it required Utopian exertions to unite what was perceived as antithetical; art and use. We're in a very different situation now; even politicians see the use value of art as they develop the arts in downtowns to serve as economic incubators. As well, I don't think it's very controversial to regard Charles and Ray Eames's work as a great artistic achievement. It's a good moment to look at the art of use and the use of art. I began making mobiles because my son really enjoyed looking at them. As I grew out of that stage I began to see how they were ruin of a genre; an exhausted art-form. I saw that the mobiles could serve as a counter example to state the abstract of painting, which I see as full of possibility. But as I made them and looked at them, they became very useful for thinking about an open framework for composition, materiality and color.

Ottmann: It's interesting to me to see your son's playhouse amidst your paintings and furniture pieces.

Hyde: Having a kid has really changed how I look at things. It's amazing to see the way he plays; actually, at his age there is no difference between play and learning. Use, pleasure and value are all intertwined. All the categories get scrambled; made and remade. It's a bit of a cliché, but I really try to keep a childlike quality with my artmaking.

Ottmann: There is also certain subversiveness in all your work.

Hyde: Well, I try to subvert my own habits. I try to make work that is on some level beautiful, but then I find that the pieces that annoy me open some of the most fertile territory to work in.

Ottmann: The massive pillows have that annoyance, they are not something you can cuddle onto.

Hyde: They annoy the categories. I call them pillows, but they don't function as real pillows; they aren't something to throw yourself upon. But they invite "pillow-looking"; you can cuddle into them visually. Imaginatively, that inscribes the pillow surface onto your skin, making the viewer's body the site of the landscape. All the colors and daubs of paint are fairly ingratiating; they are painted in basically an Impressionist manner. But because these pillow surfaces are charged in a different way than Impressionist painting you feel the surface as scabby and stained. 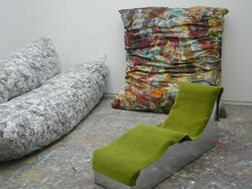 Ottmann: Now tell me again, are the furniture pieces art or really furniture? I know you don't really like to see them separated like that but then you do call it "furniture" and let people sit in it. How are they different from other designer furniture?

Hyde: I think there's a type of furniture that is almost transparent, it's just something you look at and you don't think about it at all. My furniture pieces are different because they are proposed as art, which signifies them, and that's something that is interesting for me. It's a way of extending one's taste or aesthetic beyond the single plane or single viewpoint. And that's really what I'm interested in: the utopian experiments in design from William Morris to Brasilia; this is all involved in sort of the type of adventure of the aesthetic into new territories, and this both internalization and externalization of ideas of looking and how that effects people personally and even morally. I recently went to a conference on John Ruskin. And he said something which I was really astonished by: that taste is not an aspect or index of morality; it is the only morality. Which at this point sounds very radical but in a way it's because we're on the other side of all this utopian experiments. If you think about what utopian design was about: it was about the linking of aesthetics and morality. And at this point now that the great edifices of utopian design have fallen into ruin, we can pull bits and pieces from the ruins and exploit different linkages. And that's in essence what my works are and this is what relates the furniture to the mobiles. It is the relationship of the things that are not limited by their genre. They can call themselves one thing but at the same time be used as a visual or aesthetic tool in another. The mobiles are for me a way of speaking about how a genre can be a dramatic figural thing. The mobile had a quick burst of creation and Calder defined it so thoroughly, so creatively that in fact it's a one-man genre. So what's left only is the ruins of the genre and what these mobiles are in one sense, they are a meditation on the ruins of a genre, whereas a chair would never be a ruined genre simply because of it's necessity. Painting would never be a ruined genre because of its history, which is so thoroughly identified with the values of artmaking and also its practice, something that is very intimate and easy and childlike.

Ottmann: The design frontier, from Prada to Apple Computers, is today within leisure and the domestic.

Hyde: Which is interesting because these are all of the creative chards and creative rearrangements of the ruins of Ruskin's linking of taste and morality. Certainly I'm someone who looks around what it means to be located at a particular moment in terms of history. A lot of it involves having a child and learning is an adventure and adventure is play. These things are all highly related. As an artist what's really important is to refresh my creativity and it has to be done through personal experience. Looking art the way a baby looks at art is absolutely fascinating. I can't even begin to describe that.